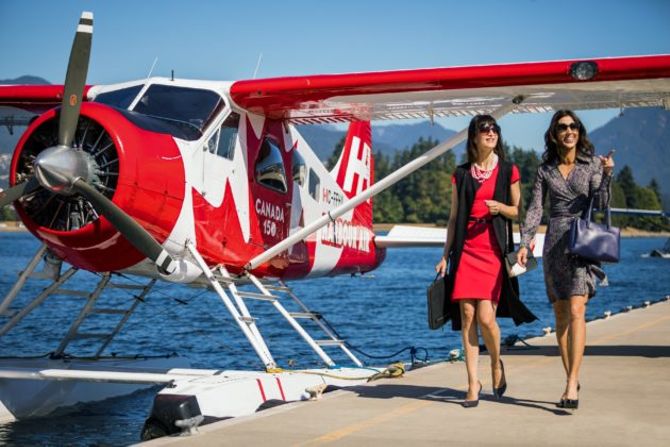 Two Pacific Northwest companies — MagniX, an electric propulsion venture headquartered in Redmond, Wash.; and Harbour Air Seaplanes, an airline that’s based in Vancouver, B.C. — say they have a firm plan to create the first all-electric fleet of commercial airplanes.

MagniX aims to start by outfitting a Harbour Air DHC-2 de Havilland Beaver with its 750-horsepower magni500 electric motor for a series of test flights scheduled to begin by the end of this year. The electric propulsion company, which shifted its global HQ from Australia to Redmond last year, has tested a prototype motor on the ground — but this would be the first aerial test of the technology.

“The excitement level is yet another notch up,” MagniX CEO Roei Ganzarski told GeekWire, “because now we’re not talking about just putting the system on an ‘Iron Bird’ on the ground and having it turn a propeller … but actually taking an aircraft into the sky, an actual aircraft that will be operating and taking people and cargo back and forth as well.”

Ganzarski said the initial tests would be done without passengers, in the Vancouver area. Regulators from Transport Canada and the Federal Aviation Administration would monitor the tests, under an arrangement that has yet to be worked out in detail, he said.

If all proceeds according to plan, the converted plane would win a supplemental type certificate and clearance to start commercial service by 2022, Ganzarski said. Eventually, all of Harbour Air’s more than 40 seaplanes — including Beavers as well as other models — would go all-electric.

Harbour Air flies routes between more than a dozen destinations, mostly in British Columbia but also including Seattle’s Lake Union. The airline carries more than 500,000 passengers on 30,000 commercial flights each year.

Due to battery limitations, Harbour Air’s first all-electric routes are likely to involve 10- to 20-minute trips between relatively close destinations, and not the Seattle-Vancouver “nerd bird” route. But the planes’ range will increase as battery technology improves.

Greg McDougall, founder and CEO of Harbour Air Seaplanes, noted that his airline was the first in North America to become fully carbon-neutral in 2007, through the purchase of carbon offsets.

“We are once again pushing the boundaries of aviation by becoming the first aircraft to be powered by electric propulsion,” McDougall said in a news release. “We are excited to bring commercial electric aviation to the Pacific Northwest, turning our seaplanes into ePlanes.”

Ganzarski paid tribute to Harbour Air’s willingness to push the envelope on electric propulsion. “They understand what it means to go all-electric early on,” he said.

MagniX isn’t alone in pressing for electric-powered aviation. An Israeli startup called Eviation is reportedly assembling its first all-electric prototype aircraft in northwest France, thanks to an estimated $200 million in investment. Eviation’s Alice business and commuter plane could have its first flight at the Paris Air Show in June, if the company gets the regulatory go-ahead in time.

Eviation aims to conduct further testing at its base in Arizona and move on to type certification and entry into service in 2022.

Kirkland, Wash.-based Zunum Aero is developing its own hybrid-electric airplane with backing from Boeing HorizonX and JetBlue Technology Ventures — again, with 2022 as the target date for first delivery to operators such as JetSuite.

Meanwhile, MagniX is working with other potential partners beyond Harbour Air.

“I can tell you this, it’ll be a really exciting year,” Ganzarski said.