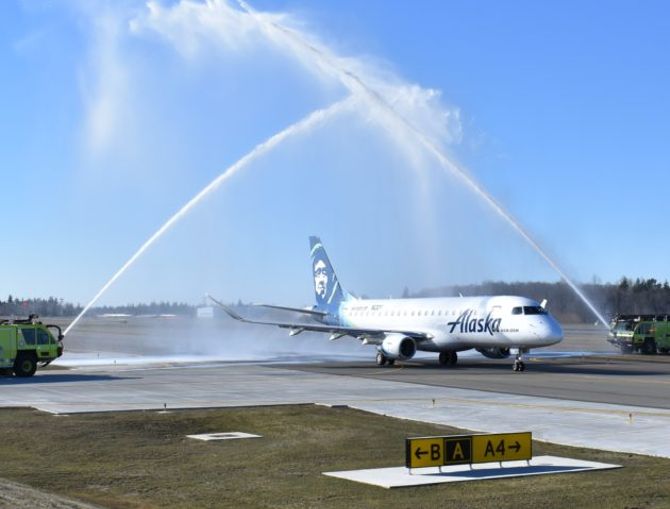 Fire trucks shoot out sprays of water to form a celebratory arch for the first Alaska Airlines jet to take off on a scheduled passenger flight from Paine Field in Everett, Wash. (GeekWire Photo / Alan Boyle)

EVERETT, Wash. — Today marks a “first” for the new passenger airline terminal at Everett’s Paine Field, thanks to Alaska Airlines’ kickoff of daily service. But it’s a “second” for Thomas Paine, the grandnephew of the airport’s namesake.

Paine and another grandnephew, Nicholas Moe, were here in 1955 when the airport dedicated a bust of their granduncle, airmail pilot Topliff Olin Paine, who grew up in Everett. The bust has since disappeared, but to mark today’s terminal opening, dignitaries dedicated a bronze statue of the elder Paine, standing right on the curb where passengers walked in to catch their flights.

Thomas Paine and Moe pulled the veil off the statue, rekindling 64-year-old memories in the process. “Things have changed a lot since then,” Paine said.

When it’s fully up and running, the 30,000-square-foot terminal will offer 24 daily nonstop flights to eight destinations in the western U.S., providing a quicker alternative to Seattle-Tacoma International Airport for northern Puget Sound communities.

Alaska kicked things off today with three departures, starting with a 10 a.m. VIP-laden flight to Portland and following up with flights to Las Vegas and Phoenix. The number of departures will eventually rise to 18 a day, with Los Angeles, Orange County, San Diego, San Francisco and San Jose added to the mix.

At the end of the month, United Airlines will kick things up a notch with six daily departures to Denver and San Francisco. Both airlines will be using 76-passenger, single-aisle Embraer 175 jets.

One-way tickets to Portland on Alaska cost as little as $44, and daily on-site parking ranges from $20 for economy-class to $40 for valet service.

Here we go!! Boarding for #FirstDayAtPAE flight to @LASairport begins now. (Agent just offered to check carry-ons to "final destination"… but what if I'm coming right back to @FlyPaineField??