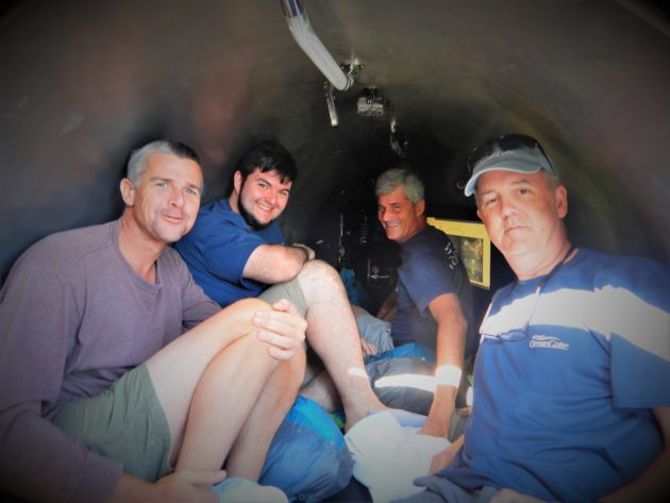 The crew of OceanGate’s Titan submersible gets set for a dive of Titanic proportions. From left are Karl Stanley, Petros Mathioudakis, pilot Stockton Rush and Joel Perry. (OceanGate Photo)

OceanGate set a deep-diving record last week when a crew of four rode inside the Everett, Wash.-based company’s Titan submersible to the Titanic-level depth of 3,760 meters (12,336 feet) in the Bahamas.

The April 17 voyage, which served as a test run for this summer’s trips to the wreck of the Titanic, marked the first time a non-military submersible carried more than three people to that depth, OceanGate said.

“This dive was another important step toward deep-sea exploration to more people and places,” OceanGate CEO Stockton Rush, who served as Titan’s chief pilot for the trip, said today in a news release. “We are developing technologies and designing submersibles and infrastructure that is making underwater exploration more accessible than ever before.”

OceanGate said it took two hours for Titan to descend to the ocean floor, outside Little Harbor near Great Abaco Island in the Bahamas. Accompanying Rush on the ride were Joel Perry, president of OceanGate Expeditions; Karl Stanley, owner of Roatan Institute of Deepsea Exploration; and Petros Mathioudakis, field technician for 2G Robotics.

Titan’s crew members spent an hour capturing 4K video imagery and testing 2G Robotics’ underwater laser scanner as they surveyed the ocean floor. The imagery and data will serve to calibrate the submersible’s instruments for the Titanic Survey Expedition, about 2,000 miles north of the Bahamas in the Atlantic Ocean.

The test missions in the Bahamas serve to demonstrate the safety of the composite-hulled submersible, which is equipped with sensors and a real-time monitoring system to ensure hull integrity during every dive. A representative from Lloyd’s Register validated last week’s dive. 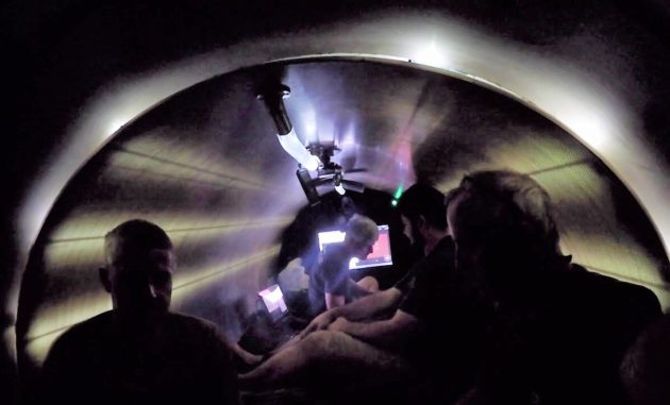 Titan crew members are silhouetted inside the submersible during their deep-sea dive in the Bahamas. Click on the picture to watch the video. (OceanGate via YouTube)

OceanGate Expeditions has scheduled a series of dives to the 107-year-old Titanic shipwreck from June to August. Titan can carry up to five people at a time down to the site. The teams will including researchers and diving experts as well as mission specialists who are paying more than $100,000 each to take part in the adventure.

Mathioudakis said the dive was a “life-changing experience.”

“It was incredibly exciting to be part of this record-breaking crew,” he said. “The dive provided hands-on experience ahead of the Titanic expedition, and the information we gathered throughout the dive will help streamline how we capture data, perform scans and catalog data while at sea this summer.”

Other crewed submersibles visited the Titanic site in the 1986-2012 time frame, but none of those deep-sea craft could carry more than three people at a time. The Deepsea Challenger, which took filmmaker James Cameron to the world-record depth of 10,908 meters (35,787 feet) in 2012, could accommodate only one person.

OceanGate plans to check in on the Titanic wreck repeatedly to document the condition of the debris field with a series of high-resolution, 3-D virtual renderings. Only a few spots remain for mission specialists on this year’s series of dives, and applications are already being taken for the 2020 season via the Titanic Survey Expedition website.

« Previous Pentagon ethics probe clears acting defense chief after claims of Boeing bias
Next » Experts from Google, T-Mobile and other tech frontiers weigh in on the future of AI