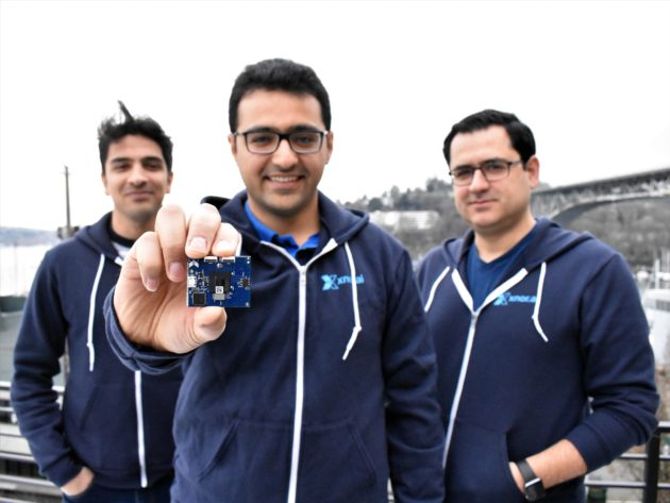 It was a big deal two and a half years ago when researchers shrunk down an image-recognition program to fit onto a $5 computer the size of a candy bar — and now it’s an even bigger deal for Xnor.ai to re-engineer its artificial intelligence software to fit onto a solar-powered computer chip.

“To us, this is as big as when somebody invented a light bulb,” Xnor.ai’s co-founder, Ali Farhadi, said at the company’s Seattle headquarters.

Like the candy-bar-sized, Raspberry Pi-powered contraption, the camera-equipped chip flashes a signal when it sees a person standing in front of it. But the chip itself isn’t the point. The point is that Xnor.ai has figured out how to blend stand-alone, solar-powered hardware and edge-based AI to turn its vision of “artificial intelligence at your fingertips” into a reality.

“This is a key technology milestone, not a product,” Farhadi explained.

Shrinking the hardware and power requirements for AI software should expand the range of potential applications greatly, Farhadi said.

“Our homes can be way smarter than they are today. Why? Because now we can have many of these devices deployed in our houses,” he said. “It doesn’t need to be a camera. We picked a camera because we wanted to show that the most expensive algorithms can run on this device. It might be audio. … It might be a way smarter smoke detector.”

Outside the home, Farhadi can imagine putting AI chips on stoplights, to detect how busy an intersection is at a given time and direct the traffic flow accordingly. AI chips could be tethered to balloons or scattered in forests, to monitor wildlife or serve as an early warning system for wildfires.

Xnor’s solar-powered AI chip is light enough to be lofted into the air on a balloon for aerial monitoring. In this image, the chip is highlighted by the lamp in the background. (Xnor. ai Photo)

Sophie Lebrecht, Xnor.ai’s senior vice president of strategy and operations, said the chips might even be cheap enough, and smart enough, to drop into a wildfire or disaster zone and sense where there are people who need to be rescued. “That way, you’re only deploying resources in unsafe areas if you really have to,” she said.

The key to the technology is reducing the required power so that it can be supplied by a solar cell that’s no bigger than a cocktail cracker. That required innovations in software as well as hardware. “We had to basically redo a lot of things,” machine learning engineer Hessam Bagherinezhad said.

Xnor.ai’s head of hardware engineering, Saman Naderiparizi, worked with his colleagues to figure out a way to fit the software onto an FPGA chip that costs a mere $2, and he says it’s possible to drive the cost down to less than a dollar by going to ASIC chips. It only takes on the order of milliwatts of power to run the chip and its mini-camera, he told GeekWire.

“With technology this low power, a device running on only a coin-cell battery could be always on, detecting things every second, running for 32 years,” Naderiparizi said in a news release.

That means there’d be no need to connect AI chips to a power source, replace their batteries or recharge them. And the chips would be capable of running AI algorithms on standalone devices, rather than having to communicate constantly with giant data servers via the cloud. If the devices need to pass along bits of data, they could transmit them over a low-power, long-range wireless connection.

That edge-computing approach is likely to reduce the strain of what could turn out to be billions of AI-enabled devices.

“The carbon footprint of data centers running all of those algorithms is a key issue,” Farhadi said. “And with the way AI is progressing, it will be a disastrous issue pretty soon, if we don’t think about how we’re going to power our AI algorithms. Data centers, cloud-based solutions for edge-use cases are not actually efficient ways, but other than efficiency, it’s harming our planet in a dangerous way.”

Farhadi argues that cloud-based AI can’t scale as easily as edge-based AI. “Imagine when I put a camera or sensor at every intersection of this city. There is no cloud that is going to handle all that bandwidth,” he said. “Even if there were, back-of-the-envelope calculations would show that my business will go bankrupt before it sees the light of day.”

The edge approach also addresses what many might see as the biggest bugaboo about having billions of AI bugs out in the world: data privacy.

“I don’t want to put a camera in my daughter’s bedroom if I know that the picture’s going to end up in the cloud,” Farhadi said.

Xnor.ai was spun out from the Allen Institute for Artificial Intelligence, or AI2, only a couple of years ago, and the venture is ramping up a variety of commercial projects with millions of dollars of financial backing from Madrona Venture Group, AI2 and other investors.

Farhadi has faith that the technology Xnor.ai is currently calling “solar-powered AI” will unlock still more commercial frontiers, but he can’t predict whether the first applications will pop up in the home, on the street or off the beaten track.

“It will open up so many different things, the exact same thing when the light bulb was invented: No one knew what to do with it,” he said. “The technology’s out there, and we’ll figure out the exact products.”